← Previous - Art in Times of Corona Next - My Favourite Hiding Place →

There is a place in the sky where the path of the sun crosses that of the milky way, forming a cross. In ancient times it was known as the ‘Gate of Souls’ or the Golden Gate, where newly incarnated souls were said to enter the world. These ideas can be traced at least as far back as Plato in his Timeaus but most likely go much further back in time.

It is in the constellation of Cancer that the Golden Gate is to be found. This is the time of the Summer Solstice, the first day of summer.

In the ancient world the shelled creature is consistently used to represent this group of stars. For the Sumerians this constellation was depicted as a turtle, a symbol denoting Enki, a major Sumerian deity. In ancient India cancer was also seen as a turtle, representing the god Vishnu. In Egypt it was a scarab symbolising the god Khepera pushing the sun to its zenith.  This deity represented the rising sun and the renewal of life.

Gemini, the constellation before Cancer, is often represented as children or twins but were at one point in time – I hesitate to say ‘originally’ – seen as warriors who were appointed to guard this special place in the sky.

Cancer then stands at the gateway between the worlds. It stands for new life or rebirth.

In this painting I have depicted the souls entering the world through the Golden Gate. They are streaming through, pushing the rising sun to its zenith in a kind of synthesis of these various myths combined. Like seeds they swarm around the egg of the sun in an act of fertilisation.

The word solstice is derived from the Latin ‘sol’ (sun) and ‘sistere’ (to stand still). This is because at the solstices, the movement of the Sun pauses at a northern or southern limit before reversing direction. In this painting these points are symbolised by the three islands in the sea.

This painting is then a representation of both a cosmic event, the zenith of the power of the sun and a very human event, the conception of new life.

What do you think? You can leave a comment below.

Read more about the zodiac series 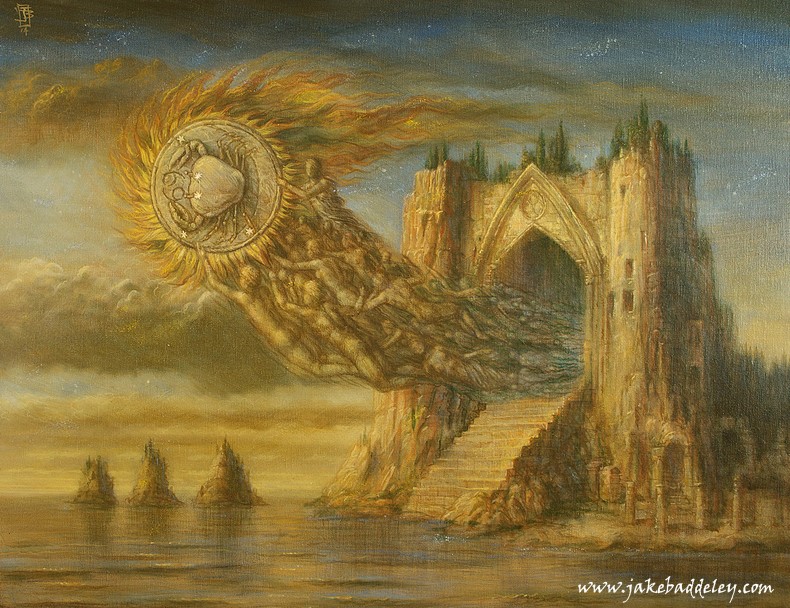 Also you will receive special promotions for subscribers and fans only.

Please check your inbox and confirm your subscription

I send out a newsletter every 6 weeks or so, so I won't be spamming your inbox...